This past April, iFLY Virginia Beach hosted the first stop of the 2017 IBA Indoor Skydiving Competition Tour. The event drew teams together to battle it out for glory and qualify for the 2017 FAI World Indoor Skydiving Championships. The impressive turnout brought teams from the US and Canada together for two days of intense competition.

In the D4W discipline, iFLY Portland locals Jeff Dimock, Timmy Hunckler, Dave Retzlaff, and Cole Fehr took gold as team Prana Vayu. To compliment their win, the team showed up with a bit of a new look. Two of the team members were wearing an unknown, jumpsuit. We've gained some insight into what exactly the guys were sporting during the competition thanks to a recent interview.

Since not everyone out there is a high-level dynamic flyer, we want to give a little history lesson and jumpsuit context. If you'd like, feel free to skip directly to the budget wetsuit section below.

Old skydiving and indoor skydiving photos have such a classic look to them - the jumpsuit is a big part of that. It's very common to see flyers in giant 'balloon suits'. These suits created massive amounts of drag using intense fabric flapping and even inflatable sections. Specifically in the indoor skydiving industry - these suits were worn out of necessity.

Early model wind tunnels like Vegas Indoor Skydiving and Flyaway use propellers below the chamber to create a flyable column of air. The low-tech design works but pumps out a fairly low-speed airflow. The baggy suits help flyers stay afloat in the wind column.

Since the early days, advances in technology and the development of tunnel flying styles has changed the jumpsuit needs of flyers.

Faster tunnels enabled flyers to transition from flat belly and back orientations into static vertical positions. The high wind speeds created airflows strong enough to suspend a flyer in the air without moving.

With the advancement in wind tunnel technologies, jumpsuits began to shrink. The need for such aggressive flap was removed as the machines could create fast enough wind speeds to support flyers in vertical orientations. While holding static positions, it was still beneficial to have some drag on your jumpsuit to help support your body weight. This was usually created by using heavier fabrics like Cordura 500 or 1000 on the lower arms and legs. 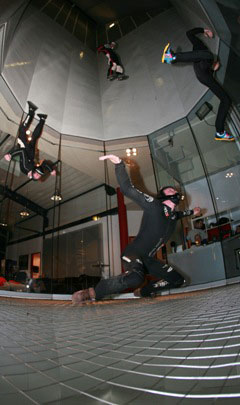 Somewhere around 2010, a new style of tunnel flying began to develop. The new wave of flying created primarily by flyers at Indoor Skydiving Bottrop was quickly labeled dynamic flying. The flying style spread rapidly around the world.

At its core, dynamic is the art of flying with constant movement through carving. Flyers use belly and back flying principles to fly through various angles. This enables the fluid movements and amazing routines you see at competitions and freestyle events. The flying style is commonly learned at slow speeds but can be performed at almost any wind speed.

This type of precision flying requires accurate body movements in a smooth airflow. The uneven drag/flap of vertically-minded jumpsuits quickly began to hold back flyers. Soon suits began to tighten again with the use of a single type of fabric across the whole body. These tighter suits borrowed some of the same non-flexible Cordura style fabrics.

As these suits became tighter and tighter, the fabric soon became restrictive. A new style of 'skinsuit' style jumpsuit was introduced and now leading jumpsuit manufacturers like Deem, Boogieman and Tonfly provide non-restrictive suits designed for the precision of dynamic flying. These suits are made of a durable yet semi-stretchy fabric. The result is a skin-tight suit with no flap or restriction on a flyer's body.

So what's the big deal about this suit that the team from Portland was wearing? In one word: price.

Today, high-end jumpsuits can come with $500+ price tags and long wait times. The suit that the guys wore was only about $35. A deal this good is almost too much to ignore. Plus the thing is 'proven' in the sense that the team trained, and won while wearing them.

This wetsuit is a full body Lycra Spandex skin used for warm water diving and snorkeling. Just like a normal indoor skydiving suit, you've got a full-length zipper on the front, a raised collar, and even foot stirrups. Beyond that, there isn't much else to it. The suit comes in a few different color options for both women and men. You can find the jumpsuit here on Amazon.

Surely the durability won't be as good as a professional suit. The wear and tear of the wind is going to be much higher than swimming. That being said, Jeff told the IBA in a recent interview that he wore the suit "for around 8-10 hours of training". So it doesn't look like it's going to just fall apart on you. In the same article, he also said that everyone on the team grabbed a suit, but not everyone ended competing in them.

Have flown the NeoSport suit in your local tunnel? Leave a comment below or join our Facebook community and let us know.

Looking for more advice on tunnel gear? Check out our complete guide which covers all the equipment you'll need as a tunnel flyer.

2 comments on “The $35 Budget Dynamic Jumpsuit?”