As the sport of indoor skydiving grows, so does the advancements in technology. From the early days of mobile propeller below wind tunnels to the modern recirculating designs, the changes have been many. In the last 10 years, wind tunnels have taken another leap forward in providing quieter, safer, and more controlled environments for the flyers. Part of those advancements is the improvement in climate control systems for wind tunnels.

Why Climate Control is Important

It is an often-overlooked matter, but the temperature of a wind tunnel's airflow is an important factor. At a certain point, it becomes unbearable and even unsafe to be in a wind tunnel. Generally speaking, the cold poses a greater risk than the heat - although both can be issues. Imagine a day below freezing, now imagine that day with the worst wind chill possible - it is easy to see how your body couldn't withstand the extreme temperatures. The same could be said for a scorching hot airflow.

That being said, wind tunnels like SkyVenture Arizona operate year-round in temperatures ranging from 35 f (4.4 c) to 115 f (46.1 c) so you can see that outside of the absolute extremes, it is possible to withstand a high range of temperatures in a tunnel even though it is not ideal.

To understand climate control, you have to understand the different basic tunnel designs. Before we get started, make sure you are familiar with the various types by reading our article: Types of Vertical Wind Tunnels 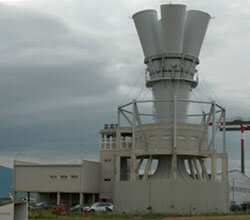 Early tunnel flying often was as simple as what might be pictured by someone with no reference for indoor skydiving - a man floating on a column of air with a propeller below providing the wind flow.

Propeller below and open flow tunnel designs pull outside air through a fan or flight chamber with little to no filter from the outside. This means that the airflow is a magnified reference of whatever the climate was outside. Cold out? Add a 140mph wind chill. Hot? That breeze will help, but only so much!

Designs that pull outside air are generally constructed in places with temperate climates - or with the idea of operating a tunnel seasonally. You can't do much to heat or cool the outside air, but what you can do is fight to keep the air clean from debris that could fly into the airflow. See the photo of SkyVenture Alcantarilla which was built with a high shrouded wall around the bottom of the bell to keep debris out.

As technology moved forward, recirculating designs allowed tunnels to be built in locations that they previously couldn't due to quieter operating noise levels. The recirculating design brought with it challenges. The air creates friction and the motors create heat which makes the looping air become hotter and hotter.

A couple of advancements were brought into place to handle the heat generated by the recirculating system. 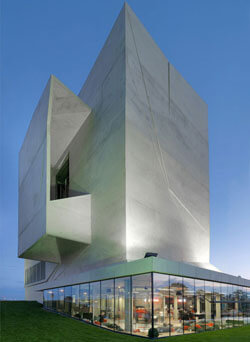 You can see clear examples of these louvre doors on Indoor Skydiving Germany (ISG) wind tunnels like Flyspot where the louvre doors have shrouds covering them on the outside of the vertical return air tower.

The most modern iterations of wind tunnels have begun to adapt air conditioning into the system. The air conditioning systems work just like they do in your house - when the temperature reaches a certain point the system kicks on cooling the air back down.

The difference is only that instead of blowing air into the system, an air conditioning system on a wind tunnel pumps cold water through pipes attached to or within the turning vanes in a return air tower. The air passes by these cold metal structures and cools.