In an announcement on October 19th, 2016 - Abu Dhabi developer Miral announced that they will be constructing a 32 foot diameter (9.75m) wind tunnel. The tunnel is being built by manufacturer SkyVenture is to be part of the $100 million dollar CLYMB facility to open in 2018 on Yas Island. Currently the world's largest wind tunnel sits at 17 feet in diameter. Because of the massive increase in scale, we decided take an in-depth look at this tunnel and how it might change the future of bodyflight.

If you are interested in staying up-to-date with the developments please subscribe to the CLYMB wind tunnel page here on ISS. 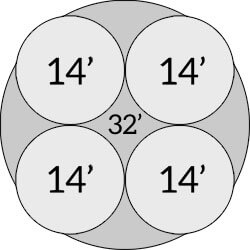 The area of a 14 ft diameter wind tunnel is 154 square feet. Bump up the diameter to 32 ft and you have 804 square feet. If the height of the flight chamber remained the same (and really, it will probably increase) this would mean that a 14 ft tunnel has just under 20% the flyable space of a 32 ft diameter tunnel. Another way to look at it is the 32 ft tunnel will give you the space of more than five, 14 foot tunnels.

We've made a quick visual reference overlaying four 14 ft tunnels against the 32 ft. This thing is massive! 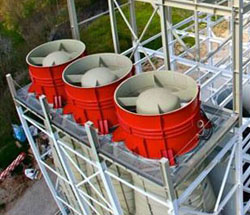 Like most SkyVenture designs, we assume this tunnel will be a dual loop recirculating model. The recent construction of several 17 ft diameter tunnels has given us an example of what to expect. You can see in this photo taken during the construction of Fly-In, this 17 ft model has expanded from 4 fans normally found powering the same style 14 ft machine up to 6.

A guess is that this style of expansion would be similar for the 32 ft model. A 2 by 4 motor arrangement on either side of the return air loop seems likely.

Previously we published an article about iFLY's new 12 foot wind tunnels. One of the main attractive features of that model is they only have 2 motors and are thus more cost efficient to run. A 32 ft operation takes a radical step in the other direction.

From a business standpoint its hard to imagine it makes sense  from a profit standpoint to build and operate a 32 foot tunnel like this on a daily basis. Would it really be feasible for anyone other than the elite rich or large groups of experienced flyers to fly in this machine? Flying multiple inexperienced flyers at the same time, especially in such a large (and likely tall) chamber doesn't make sense sense from a safety standpoint.

We will be watching closely to see what would the price will point be, and what kind of applications are appropriate.

Already there is discussion about this new tunnel supporting 16 way formation skydiving, 8 or 16 way dynamic or even what the possibilities would be for freestyle competition. We think larger tunnels will continue to open doors for interesting new competition concepts not born from skydiving.

The larger space bring a new set of possibilities. For the first time we could see flyers in the tunnel racing against each other rather than together as a team. This bigger space gives flyers enough room to allow for mistakes, bobbles, passes and more. We know that streamers can be added to the tunnel as markers. New technologies in judging have brought lasers and advanced timing systems to indoor skydiving competition that judge accurately within a fraction of a second.

Creative flying minds will surely open up the possibilities for new competition formats in this tunnel.

This is a HUGE jump up from the current models. The new worlds largest tunnel Fly-In, edged out the previous title holders by half a foot in diameter - from 16.5 ft to 17 ft. Jumping from a 17 foot diameter to a 32 foot is massive step.

Looking to the Past

You might remember hearing about a 22 foot tunnel to be constructed in Dubai. The tunnel was promoted via the Inflight Dubai website as being a real project, not just a rumor. You can see the confirmation from this screenshot of the August 2014 Inflight Dubai homepage:

This homepage was gone in December 2014. As far as we know there hasn't been anything published about this tunnel since.

The United Arab Emirates is notorious for building some of the worlds largest and most impressive things. There is really no more likely place that this tunnel would end up becoming a reality. We are optimistic and truly hope this facility opens in 2018 as announced.

Stay in the Loop

We will be waiting and watching the progress on this new tunnel very closely. If you wish to stay up-to-date with any new announcements please be sure to subscribe to the Indoor Skydiving Source newsletter, subscribe to updates on the 32 foot location page, and follow us on social media.